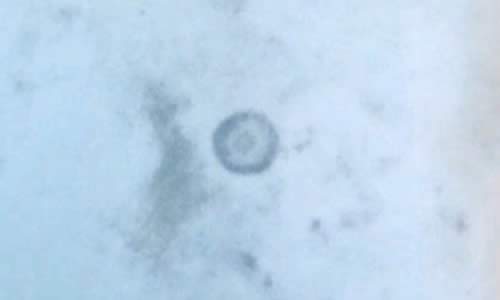 Ancient circular, stone features have been found in parts of Saudi Arabia, Sudan, Kenya and Somalia.  Seen with Google Earth they have been documented at the Google Earth forum in an extensive placemark collection located here.   The features have also been documented by archaeologists and enthusiast but their real purpose has yet to be determined although the main theory is the circular formations are a type of ancient burial mound.  The main characteristic of these circular features is a central, circular stone feature or stone mound that when viewed from above appears to be a large circle with a dot in the middle.

The investigation continues as this post will reveal that similar circular features can be seen off the East Coast, Florida and Belize thanks to Google Earth.  Most of the circles in North and South America are underwater and apparently being underwater has helped to preserve them and allows them to be more visible from the air.  The circular features in this article appearing in North and South America have not been fully investigated by archaeologists but it is hoped this visual record will lead archaeologists to take notice and help determine exactly what these circular features where and why they are located on a global scale.  The dating of the Arabian circles is from around 8500-6500 B.C.  It is obvious the circular features found here in North and South America must be of a similar dating when water levels where lower and ancient people occupied the now inundated continental shelf.  Therefore, a dating of around 10,000 B.C. or earlier could be a possibility.

Circular feature is approximately 35 feet in diameter and appears to be a double ringed circle with the inner circle approximately 15 feet.

Circular feature is approximately 35 feet in diameter and appears to be a double ringed circle with the inner circle approximately 10 feet.

The circles in Saudi Arabia have been researched by Abdullah Al-Saeed and ground images can be seen at his website located here.  A few are posted below for reference.  Another link to his site contains more ground images of the stone circles and lines of Arabia.

The following images off the East Coast have been color enhanced.

This area contains numerous circular features with darker areas in the middle.  The relationship to the Arabia sites is very obvious including dimensions.

Circular feature near the bottom of the image is approximately 45 feet in diameter and appears to be a double ringed circle with the inner circle approximately 10 feet.

Double ringed circles off the West Coast of Florida.

It is very possible the circular features found off the East Coast of the United States and the circular features in Saudia Arabia known as “kites” could actually be similarly constructed features by a similar culture.  This implies there could have been a worldwide culture long before Columbus sailed to America.

More evidence needs to be gathered at the sites in question here in the US to arrive at firm conclusions yet the visual evidence shown here is very compelling to suggest there is a connection.

If anyone is interested in diving on the sites here in the US, please contact us so we can get you involved in the search.