Possible Pyramids Found in Egypt with Google Earth- The... 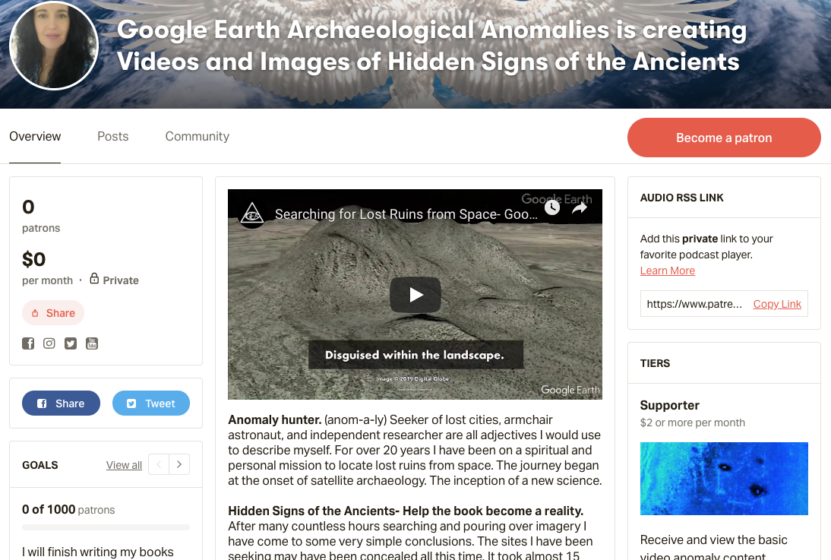 So much has happened since you originally began to follow my story about finding a new potential pyramid site in Egypt.  Unfortunately, life changes and tragedies have kept me from fulfilling my dreams of digging deeper at Abu Sidhum.  As many of you know my father passed away in 2016 of a very rare brain cancer, following my mother who passed in 2009 from a rare cancer as well.  It is times like these that build character and I’ve done an incredible amount of inner searching as well as increasing my efforts to continue searching for lost ruins from space.  My parents taught me to never give up, so the story continues.

Along the way, the sites have been accumulating and due to ethics, I have struggled for several years with exactly how to get the information out to the public without jeopardizing the integrity of any potential archaeological sites.  This has weighed heavily on uploading any new releases and instead, I focused on verifying the methodologies I had created for finding sites instead of releasing what has been identified.  Great news is the methodologies are accurate and I continue to find new sites on a weekly basis!

Academic dogma has also hindered the research as I continue to reach out to archaeologists only to be ignored and blatantly dismissed.  I knew this would be a long road in the beginning, I just didn’t realize how long.  There are so many good things that are a result of struggle, and I am thankful for every opportunity to learn and expand my spiritual awareness which has driven the research from the beginning.  Struggle is opportunity!

The Biblical Joseph and Abu Sidhum?

Rumors have surfaced from Egypt along the way that several high ranking Egyptian officials now feel the Abu Sidhum is indeed a lost pyramid or mound site.  The only problem seems to be there is a direct connection with the prophet Joseph and the nation of Israel.  According to documents kept by the Egyptian couple I visited concerning this site, they felt strongly the mound complex was created by Joseph who went on to irrigate the surrounding area with works of great canals that have been documented, created by the prophet himself.

As astounding as all this may seem, I have managed to keep this information to myself for almost 6 years now.  The couple in Egypt, Haidy, and Medhat claim to have acquired a vast collection of local Faiyum documents from a scientist after his passing.  It is within this documentation, that the Abu Sidhum site was mentioned as being created by the prophet Joseph.  The only problem is due to this possible fact, the site was stricken from the archaeological record to keep any connection with Israel and an Egyptian archaeological site possibly created by a Jewish prophet away from any lawsuit or claim.

If any of you know history, you will know the fences have been mended between Israel and Egypt, but there still is tension between the two countries, otherwise, the Egyptian officials that know this information would be forthcoming.  The local people near Abu Sidhum even have a story that was relayed that is very interesting.  During the 1980s an archaeologist visited what was thought to be a natural formation close to the Abu site and hired the locals to help dig.  The archaeologist unearthed artifacts that seemed to be of a Jewish origin and the locals overheard all the info.  This unnamed archaeologist then took the information and all the artifacts back to Cairo, and they never heard anything more from him again.  Apparently the artifacts remain hidden to this day within the Cairo museum.

Trying to always stay on the positive side of thinking and viewing the world, I find it a great opportunity instead of a potential threat to Egypt.  Joseph is greatly revered by Muslims and is mentioned more in the Quran than he is in the Bible which is fascinating.  I see this as an opportunity to bring the two religions together instead of driving them apart.

So… now you know the whole story and you can see why Egyptian officials may be bypassing and ignoring this site for diplomatic and political reasons.

How long Must we Wait to Find out More?

At this point, it is out of my hands and Haidy and Medhat have not been forthcoming with all their papyrus documentation concerning the site.  We can only hope that someone in the future will dig deeper or a way will open that I can investigate this site further.  Supposedly there are many secrets concerning water technology and mysteries concerning lost technology.  That remains to be seen, but now you know the reason for silence.

In the meantime I have helped with the content for several documentaries.  Many of you have seen the documentary “What on Earth” that debuted on the Science Channel.  I contributed to season 2 but did not receive a credit for the numerous sites I supplied.  They asked me to help with season 5 and needless to say, I had to decline unless they give me credit for the research.  I felt that was only fair and the correct course of action to take.  The good news is my work for the “Atlantis Rising” documentary created by James Cameron gave me new contacts and new sites to investigate.  More news is planned to be released in the future concerning new opportunities. (I’ve also had the opportunity of working with a few rogue archaeologists who see value in thinking outside the box.)

The story has just begun and now it’s time to release the methodologies and stimulate this new science in exciting new ways.  Subscribe to my newsletter for more info and releases.  I won’t give up until I find answers or pave the way for future generations to continue where I leave off.

The Egypt site was always meant to be a starting point.  Now, it is definitely time to begin releasing sites to the public and to the scientific community.

Join me now on Patreon as I begin to release key, potential archaeological sites.  You will receive exclusive content and will also be a primary supporter of my book. Hidden Signs of the Ancients.